Went to the local farmers' market the other evening. In one of the regular fruit stands, a woman was cutting up pineapples, a nice service for those of us afraid to cut ourselves in the process. But the waste piled up - some of which could have been eaten. 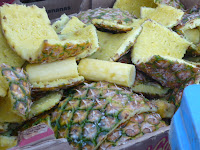 It reminded me of the frightening statistics concerning food waste. Every year, in a single country like Canada, millions of tons of food are discarded. Some of it is household refuse - you know, the stuff at the back of the fridge that is starting to move - and the rest comes from restaurants, outdoor venues, etc. etc. The richer the country, the larger the waste of otherwise usable material.
No surprise there. But since so much money could be saved, not to mention the ever-diminishing available area in landfills, you have to wonder how this problem has gotten so out of hand.
Abundance must do something critical to the human brain, more than just causing us to salivate, in the case of fresh food. It causes us to take chances, which we wouldn't dare do in times of scarcity. (Wasteful people in famines get hungrier faster, and probably die sooner.)
I wonder if the sight of multiple items of the same category - such as the squashes below - creates different responses from , say, an all-you-can-eat buffet with a variety of items? 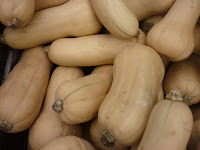 Posted by Louise at 1:28 PM No comments:

The Future of Food 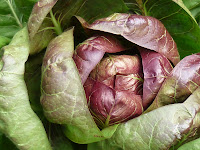 If it has not become clear by now, the human food supply is not secure. We didn't need a major drought in most of North America to think this, but I imagine many people lived their lives from day to day without giving food security a second thought until the recent food price increases. (And more are ahead. Climate change is here to stay.)
Why should they have worried up to now? When something does not require your attention by being irregular, even occasionally difficult or nonexistent, we stop thinking about it.
Well, maybe now we will stop taking our food for granted.
Sure, the subject has come up many times over the decades of our supposed wealth and prosperity. But the talk has mostly been a part of aid programs to other countries. Those "other countries" are still hungry or nearly so, but now we have ceased to regard a steady flow of foods and food products from producer to consumer as a given.
People are talking more about old-school solutions to food insecurity, to add to the new-fangled ideas dreamed up by scientists and politicians: 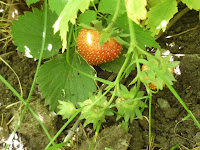 The key seems to be redundancy: back-up measures already in place in case something fails. Hospitals have generators in case of electicity black-outs. Cities should have local food production in case of delivery problems, droughts, etc.
And what about "alternative foods"? As John Vidal says in his article in The Guardian, insects and lab-grown meat may provide most of our protein one day. The husbandry of large animals like cattle may become undeniably unsustainable, due to loss of pasture to drought, loss of feed to direct human consumption (instead of indirect, i.e., via the cow which eats it first), and low water supplies. (Cattle require loads of water to drink in their lifetimes, and the slaughtering process is also very water-intensive.)
As the human population continues to grow, and most people insist on animal protein every or nearly every day, we're going to have to find solutions.
Grasshopper soufflé anyone?
Posted by Louise at 1:29 PM No comments: